The History of WordPress 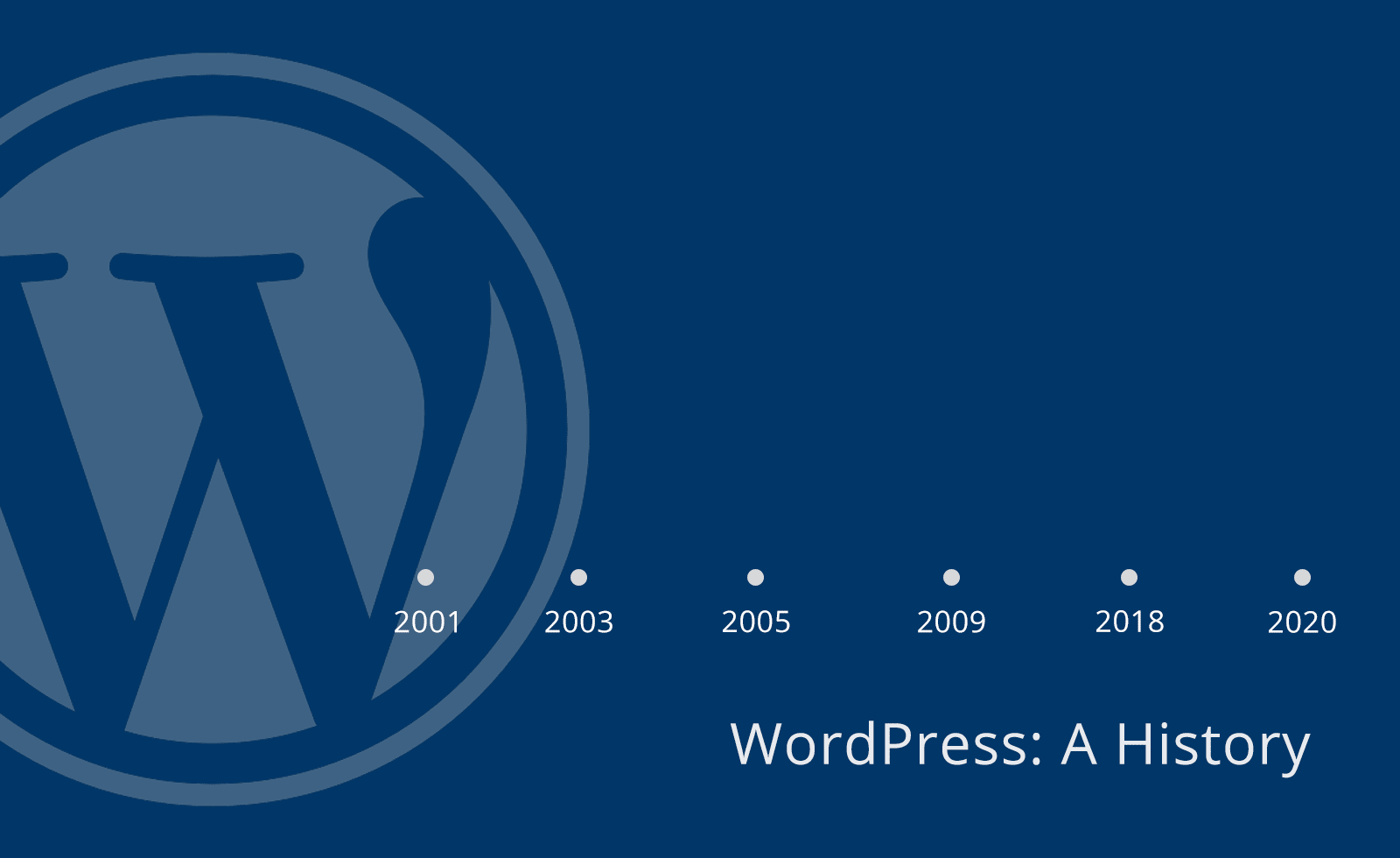 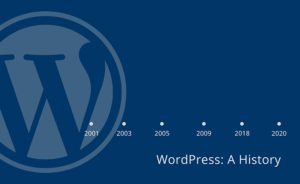 Today marks WordPress’ 15th anniversary, and how far the platform has come. Looking at the history of WordPress, you may be amazed to find the rollercoaster ride wasn’t always so smooth.
Yet after over 317 separate versions, several funding campaigns, and the creation of one of the digital world’s most iconic mascots, WordPress now has over 59.3 million posts per month and a continually expanding user base. Boasting a staggering 60% share of the CMS market, it’s easy to forget that WordPress had humble beginnings.
To celebrate WordPress’ birthday, we’ve put together a brief history of the platform, complete with some of the things that make WordPress, well, WordPress. 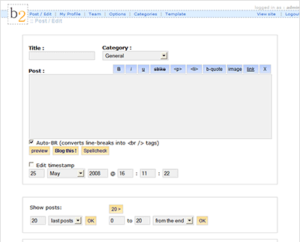 A long time ago, before WordPress, there was B2/Cafelog.

B2/Cafelog was an unmaintained and straightforward blogging tool released in 2001. Created by a French programmer known as Michel Valdrighi, it wasn’t intended to take over the market, but rather to improve blogging by increasing accessibility.

The platform was easier to use than competitor products and several people made the move to B2/Cafelog. Disaster struck, however, in December 2002. Valdrighi disappeared and support for the B2/Cafelog platform immediately ceased. With no support, bloggers moved elsewhere. Had it not been for Matt Mullenweg, B2/Cafelog would likely have disappeared entirely.

In January 2003, Matt Mullenweg forked B2/Cafelog and began work on what became known as WordPress. 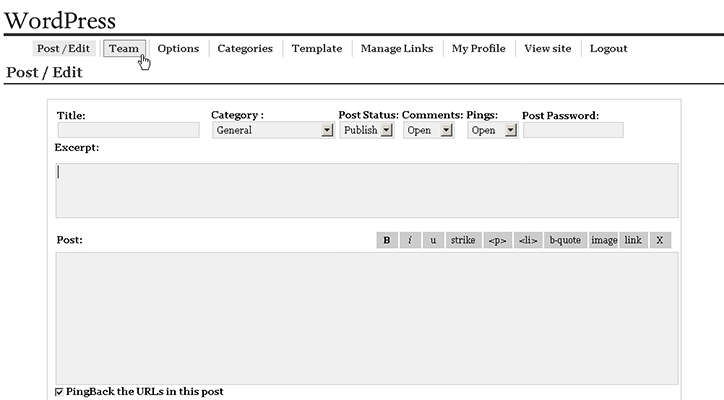 Following the disappearance of Valdrighi, Mullenweg decided that it fell to him to create a platform to replace B2/Cafelog. WordPress (0.7) was officially announced May 27, 2003.

In creating WordPress, Mullenweg didn’t just copy B2/Cafelog. Instead, he took the program and added several improved features, including a better admin interface, enhanced templates, and a straightforward user experience.

It was immediately well received, with several bloggers noting the ease of use that came with the new platform and praising Mullenweg’s improvements over the existing system.

In 2004, Mullenweg expanded the capabilities of WordPress in version 1.2 (Mingus) by adding plugins. Designed to increase functionality by allowing independent developers to implement new code quickly, the WordPress community started to expand at a staggering rate.

While WordPress was opening itself up to the community with plugins, competitors (now largely faded into obscurity) were headed in the other direction. Moveable Type released new licensing terms unliked by many of its users. These users subsequently left Moveable Type and joined WordPress. It was at this point in WordPress’ history that things started to truly look up.

2005: Themes Are Released and Funding Raised

In early 2005, WordPress 1.5 (Strayhorn) was released. Strayhorn introduced themes and pages. At this point, the themes were still relatively simple and nothing like the modern WordPress themes you see today. However, Strayhorn offered users the ability to create their own, instead of being limited by the platform’s developers.

In 1.5 we have created an incredibly flexible theme system that adapts to you rather than expecting you to adapt to it.

This release was an immediate success and was downloaded more than 900,000 times.

Again, in business, 2005 was a good year for WordPress. By October, Automattic – the company behind WordPress – managed to raise $1.1 million in funding, including from investors such as True Ventures and CNET. 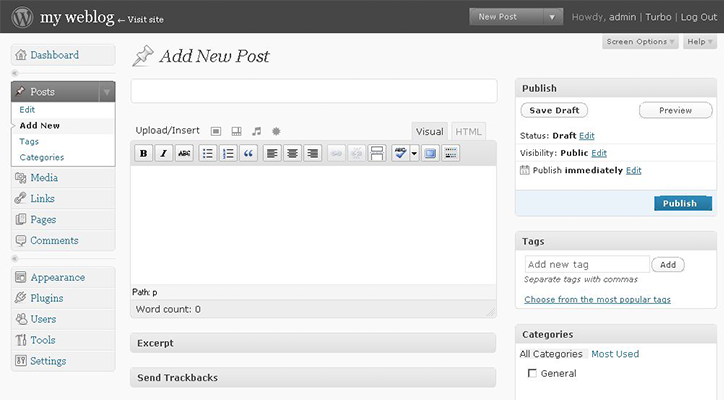 In 2008, WordPress decided it was time to improve on their already popular admin interface by implementing new design features. Starting from WordPress 2.5 (Breker), the design company Happy Cog officially began work on the WordPress UI with testing and implementation.

This led to the development of Crazyhorse, a UI prototype that was eventually released as 2.7 (Coltrane). By 2.7, WordPress had also incorporated features such as built-in plugin installation, one-click updates, and shortcodes. 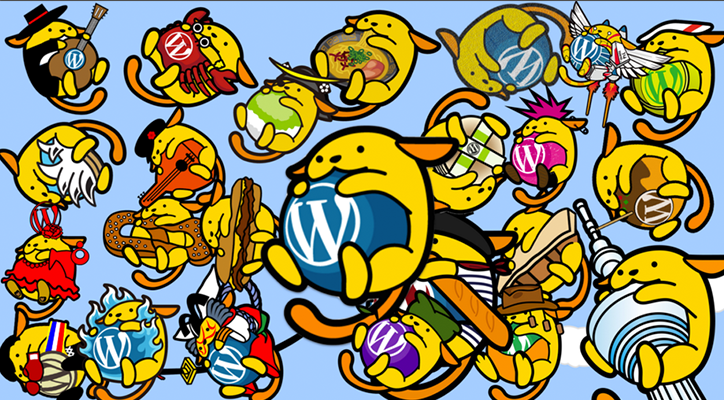 Following a WordCamp Tokyo session, during which Matt Mullenweg asked attendees how they could better market WordPress in Japan, the concept of a mascot was proposed. After exploring other options, it was decided that a mascot was the best way forward and illustrator Kazuko Kaneuchi was hired.

Over the next two years, an intense development process took place in which Kaneuchi worked with the WordPress community to create a mascot that embodied the blogging platform. On February 19, 2011, the mascot was unveiled at WordCamp Fukuoka and in a WordPress blog post. On August 2, 2011, following an online survey, it was given the name Wapuu.

This is likely one of the main reasons for why WordPress has become such a dominant force in the world of modern CMS. The ability for anyone to download and learn WordPress has meant a continuously expanding community with ever-expanding support.

By the beginning of 2011, WordPress powered over 12% of all websites around the world. 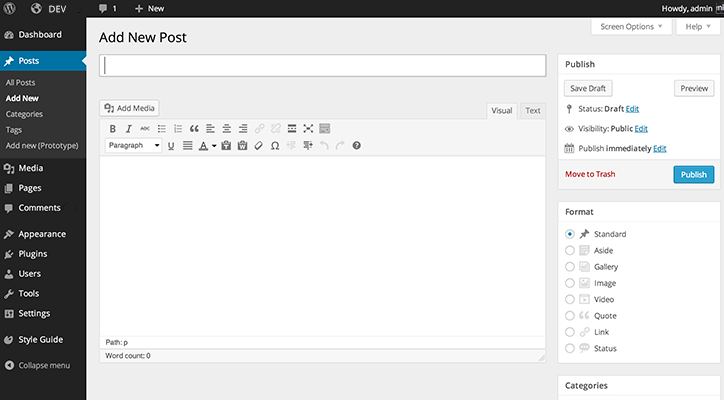 2013: WordPress Is the Most Popular CMS in the World

Fast forward several years and WordPress had become the most popular CMS in the world, occupying over 59% of the CMS market.

Late 2013 also saw the default theme “Twenty Thirteen” appear, which you may still recognize today. In addition to this, video and audio support was added, as was an improved autosave feature designed to help limit data loss. Version 3.8 (Parker) saw a dashboard revamp for the first time since version 1.0, adding responsiveness and improving usability.

WordPress 4.0 (Goodman) was released in 2014, with the aim of improving WordPress’ writing and management experience. Embedding and media uploading were improved vastly, as was content management on-page. This was largely thanks to WordPress changing the WordPress editor to fit content as you wrote it.

With the release of 4.3 (Billie), customization remained an important focal point for the WordPress team. Advanced tools were included directly in the blog editor, and the ability to customize and add menus was included. Keyboard shortcuts, such as using ## before and after a line to make it a title, were also included.

On top of this, further improvements were made to the admin interface, improving WordPress’ responsiveness and adding the ability for editors to work on any device.

With 27% of the internet powered by WordPress, it’s safe to say that WordPress has come a long way since its humble beginnings. Currently, there are over 55,000 plugins for WordPress and countless more themes.

One of the biggest changes coming to the platform is WordPress Gutenberg: “a new way to publish”. Gutenberg takes the historical WordPress publishing interface and changes it by employing something called ‘blocks’.

For a full breakdown of the new Gutenberg interface, and a how to on setting it up, head over to our WordPress Gutenberg guide.

Host Your WordPress Site in the Nexcess Cloud.

We’re offering 1 month of free hosting with no commitments to see how we can help you to realize the promise of cloud. Use code WORDPRESS15 during checkout.