WordPress Continues To Dominate The Blogosphere

WordPress has long worn the laurels as the most popular content management system in the world. With its 10th birthday on the horizon, WordPress has become the platform of choice for a huge range of content producers, including solo bloggers, large media organizations, and corporations. Even with strong competition from other platforms, the top performers in the publishing market are consistently choosing WordPress.

In a recently released survey of the top 100 blogs, Pingdom revealed that 52 of the top 100 are using WordPress. That’s a growth of 4 sites from last year’s 48. WordPress competitors are barely a blip on the radar, with custom sites making up 12 of the top 100, and Drupal, the highest ranked content management system apart from WordPress, managing only 7 sites, having dropped one from 2012. 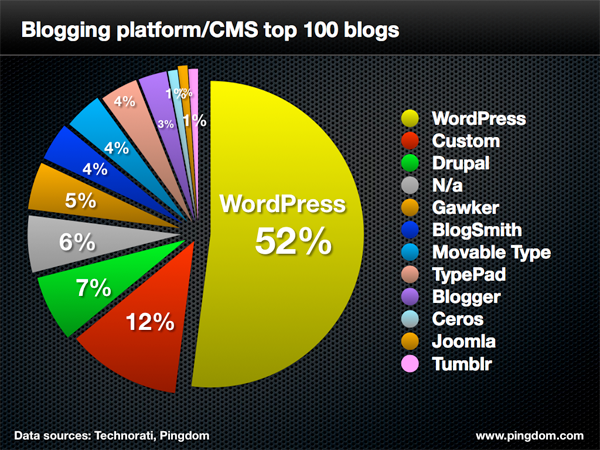 The custom site figures exclude the Gawker publishing empire, which uses its own custom-made platform and has 8 sites in the top 100.
Up and coming SaaS platforms made a relatively poor showing. Tumblr, which hosts over 100 million blogs on its platform and had a recent tremendous growth spurt of 7 million blogs in 25 days, managed only one site among the elite. Blogger, Google’s venerable blogging platform, snagged one more of the top 100 compared to last year, moving from 2 to 3 blogs, placing it just below TypePad and just above Ceros.

It’s instructive to look at the range of organizations that choose to use WordPress as the foundation of their publishing activities. Unsurprisingly, a lot of tech and tech culture blogs plump for WordPress, including GigaOM, TechCrunch, Mashable, and Smashing Magazine.

Four years ago, there were many superstar bloggers in the list, including Chris Brogan, Perez Hilton, and Robert Scoble, all resting on WordPress foundations. But in the intervening years many of the individual bloggers appear to have been pushed out of the list by large publishers.

Media giants like the New York Times have risen up the ranks as they supplement traditional journalism with blogs. NYT has its popular The Lede, Bits and Paul Krugman blogs on WordPress. Reuters is also in on the WordPress action with Felix Salmon’s blog making the cut.

Comparing the figures from 2009 with this month, we also see some platforms have dropped out of the ranking altogether. Scoop and Bricolage just made it into the top 100 at the end of the last decade, but they no longer make the list.

We’re sure that next year we’ll see more changes among the smaller content management systems, but, given the trend, it’s likely that WordPress will continue to dominate the list into the foreseeable future.